PLA Group forms a group of companies engaged in the production of machinery, tools and services related to agriculture.

SHOW THE WAY BY DEMONSTRATING RESULTS.

PLA Group forms a group of companies engaged in the production of machinery, tools and services related to agriculture. It is the result of commercial and productive evolution of a family business, thanks to the innovative force that characterizes it, it has left marks on the modern history of national agriculture implementing technology never used before.

In 1975 PCY was founded in Las Rosas, Santa Fe province. The creative profile of one of its founders, Juan Carlos Pla, began to excel in their products: they were the first in the country to create grain elevators for the ports. Until then ships carried the grain in bags.

But two years later, an event would become a milestone in the company: at the request of the Establishment Las Marias they build a high chassis on which they mounted a tractor, with a clearance of 1.40 meter for tea cultivation. This fact represented the origin of what would become the company`s emblematic product, one that would lead it to be recognized in markets all over the world because of its quality and technology.

A year later, in 1978, PLA manufactures the first self-propelled sprayer in Latin America. 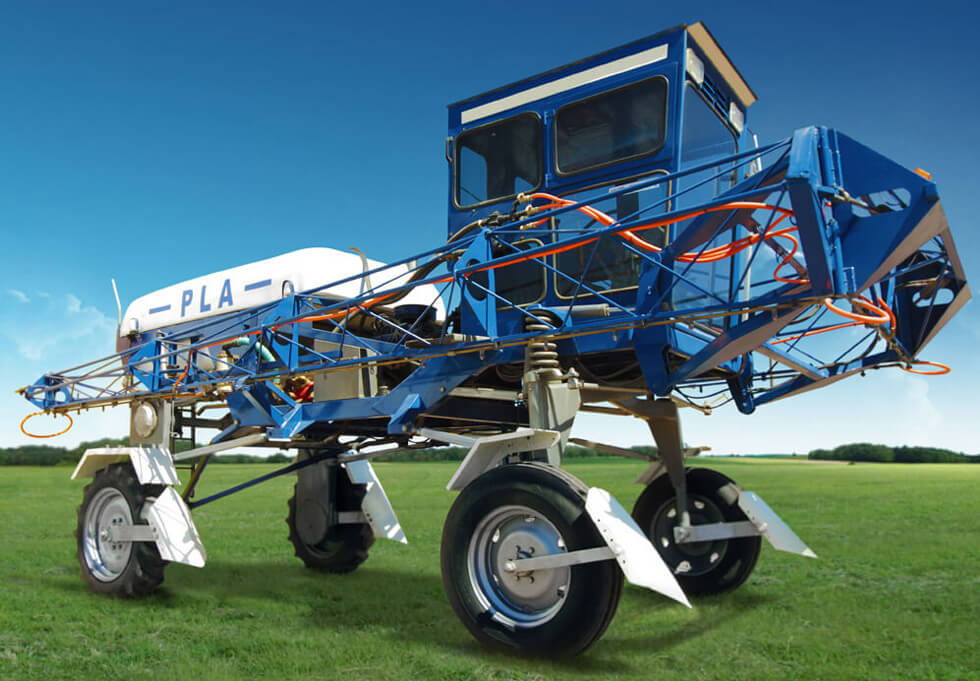 STRENGTHENING THE PATH TECHNOLOGY AND INNOVATION.

Investigation, creativity and curiosity followed their initial course. PLA imposed its innovative stamp throughout its range of products, obtaining new equipment such as pull-type sprayers with hydraulic lift and the first three point sprayers in the ensuing years. That is how it earned recognition in the Argentine market and definitive leadership in the area of spraying, starting to successfully enter foreign markets.

At the end of the eighties the company is consolidated and mature, developing its engineering, manufacturing more accurate and diverse equipment. So is that in 1993 PLA launches its planter with auto-trailer system, becoming pioneer in developing and implementing this new feature in Argentina, now adopted by many competitors.

In 1999 PLA gives further testimony of its creative commitment and surprises everybody by manufacturing the first sprayer with automatic pilot in the world.

OUR DESTINATION: THE WORLD.

During the last decade the group develops a marked trend towards globalization of its products. With the opening of PLA do Brazil during 2004, a manufacturing plant that currently has over 100 employees in the city of Canoas, PLA machinery has a privileged presence in one of the most important economies in the world. This policy is maintained through alliances with multinational companies to jointly develop technology and also to export to leading markets on four continents, like Australia, South Africa, Eastern European countries and Mexico.

Currently, PLA has a new plant in Las Rosas, adding 8000 square covered meters to the existing ones. Another sign of the brand growth: recently it joined the Pampa Management Capital Group as a strategic investor to continue to expand horizons in different international markets.

Since our beginning we wanted the brand PLA to be related to an avant-garde company and superlative quality. True to the entrepreneurial vision of Juan Carlos PLA, we develop advanced engineering in our own facilities and combine it with the latest technological trends, always striving to meet the current needs and anticipating future projections. This allows us to produce equipment that guarantees better agronomic results, generating the lowest possible environmental impact.

To supply agricultural equipment and services to the national and international markets applying technological innovation. To exceed customer expectations, generating sustainable profitability for growth and development of the organization.

Our vision is to lead the national market and increase international presence, with special emphasis on quality, permanent innovation and customer satisfaction. To build strategic alliances in the value chain generating synergy that maximizes quality and profitability.

To develop the skills and capabilities that enable the professional growth of our human resources.